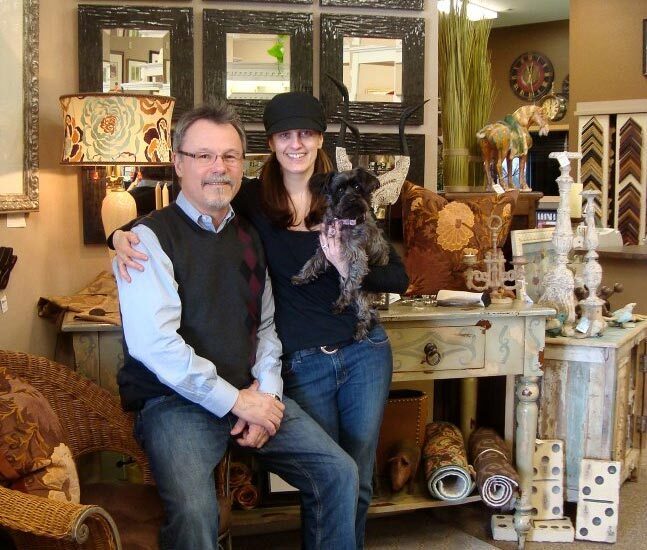 Rising to the Highest Level with The Frame Workshop of Appleton

John Ranes, a military brat, was born in California and spent his formative years mostly on the East Coast (Maryland and DC area) and 4 years in Europe (England – Germany). He then moved to Wisconsin to attend Ripon College and ended up staying, raising a family and starting a business in 1978. John began teaching for PPFA at conventions in 1981, followed by working as a consultant for Fletcher-Terry in 1987, as well as for Tru Vue. Since then, he has conducted seminars and workshops on framing throughout North America, Europe, Australia, New Zealand, Brazil, Russia, Japan and China, mostly working with framing distributors and framing trade associations. John currently writes for Picture Framing Magazine and teaches every year at the WCAF Expo in Las Vegas. He has also written articles for Art and Framing Today (UK), Der Kunstandel (Germany) and Profile Magazine (Australia). In 2015, John was presented with PPFA’s Lifetime Achievement Award. John met his wife, Sarah, in the framing industry and they have been running their business together since 1996. Sarah also has extensive framing experience and has won awards including, (but not limited to): numerous Wisconsin PPFA Chapter Framing Competition Awards and in 2007, The Frame Workshop of Appleton became the first frame shop in the world to win a framing award on three continents, when Sarah’s entry took the Third Place award at the National Australian Framing Competition in Sydney.

John and Sarah first opened The Frame Workshop of Appleton, Inc. in September 1978 as a DIY and Custom frame shop, but slowly diversified into some gifts and home décor items in the 1980’s, expanding to 3400 sq/ft in 1984 and then again to 6000 sq/ft in 2009. Today the business is a strong mix of custom framing, gifts, home décor and European Christmas décor supported with a strong Online presence since 2001. Creative custom framing has always dominated their business image as they won their first framing completion awards in New Orleans in 1981. That stimulated entering and winning and learning as they have accumulated over 100+ awards since then, taking framing awards in the UK and Australia as well. That dedication to design and quality assures customers that John and Sarah's everyday framing for them will be executed with their best interests in mind. Despite the expansion and diversification into gifts and home décor, their love and passion of framing things has kept their customers loyal and enticed new customers to use their services.

Adaption to Current Practices has occurred, but due to the size of their business and the consumer reactions in Wisconsin, their adaptations have not had to be as severe as shops in other parts of the country. Appointments and continued curbside pickup have not been an issue. Despite curbside arrangements still being offered, after small non-essential businesses re-opened on 11 May, they were able to pretty much move into an Open Retail business again- With a retail floor of about 3,500 sq/ft, not more than 4-5 people are within the shop at any one time. Face masks are mandatory for their staff on the floor and highly encouraged for customers. John and Sarah stress this with signage upon entering and with a greeting table offering hand sanitizer. Four weeks into this new normal, they have seen very little resistance to staff asking customers to adapt – most reach for the sanitizer upon entering without any verbal prompts.

After seven weeks of shutdown operating at about 20% sales volume, which was mostly attributed to some curbside business and Online website orders, John and Sarah were naturally happy the first two weeks upon re-opening to see a steady flow of custom framing and gift customers (both)! John felt that this surge would taper and that they were just witnessing a response to so many customers being homebound, in that they wanted to shop to re-spark a sense of normalcy in their lives and activities. But- two weeks later and a full month into being open, they have not seen any decline in traffic or spending. They have priced themselves fairly and not attempted to compete with discounts and ultra low pricing options. John concludes that custom framing has naturally been used by the upper middle and upper class folks who are less likely to be impacted by the economic situation that unfortunately has had an effect on many lives: "I also believe that our gift and home décor sales and product selection have mirrored our custom framing in quality and tastes. 85% of our gift items are not manufactured in China, but rather represent a diverse and historical mix from North America and Europe – all equal trading partners. Many are unique and of quality, despite a broad price point range of items. Positioning our shop to be a multi-faceted business is one element that gives it some survival characteristics. I would encourage anyone in this industry to really think about their own business identity and analyzed how it stands apart and what makes it special. If you don’t push your business to that higher level, then everyday survival becomes more difficult, not to mention the craziness we have all gone through".